In 1968 the Colorado Apartment Association Denver Chapter was formed by a small group of local apartment owners who felt it necessary to protect their interests as small business operators.

The budget was discussed, and it was determined they would need approximately $6,000 per year for operating expenses!  The membership dues were a whopping $25 per year (which included NAA Dues) and dinner meetings were held at various restaurants at $4 per person! 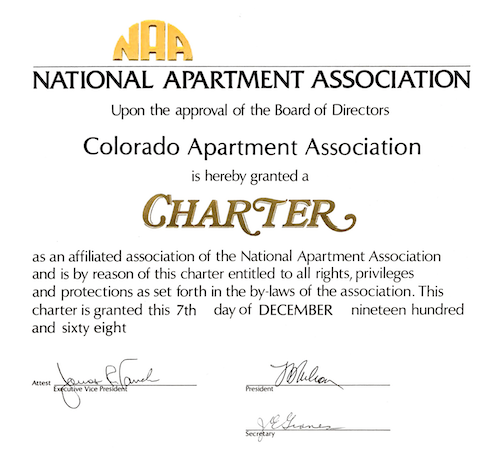 Focusing on the principles of free enterprise and providing quality housing for those that choose to rent, the association has through the years held off many legislative issues that would have had negative impacts to our industry. Over the decades the association has continued to develop and enhance the level of professionalism of operating rental housing. Beyond the fundamental role of apartment living advocacy, the association has evolved into a powerful training entity through incredible volunteerism from industry experts. Long time members have continued to brand the organization as AAMD.

It didn't take long for the Association to expand its membership to supplier companies. Through enormous opportunities and functions, supplier members have gained access and promotional platforms through AAMD. Providing great financial and volunteer support, the AAMD supplier members have evolved into a great asset of the organization.

The mission of AAMD is to enhance member and association profitability, prosperity and professional growth through legislative representation, educational advancement, information, and networking opportunities.

"The purpose or purposes for which this corporation is formed shall be to promote the multi-family rental housing industry in the Denver metropolitan area, to seek improvements in the techniques of ownership and management, to establish and maintain high professional standards and sound business practices, and to work and cooperate with other organizations and individuals for the improvements and advancement of the multi-family housing industry. The corporation is dedicated to equal opportunity housing and is committed to non-discrimination of housing based on race, color, creed, religion, sex, familial status, handicap, or national origin." - (AAMD Bylaws)