Month of May Covers Through The Years 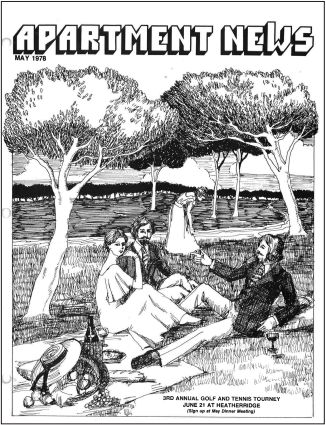 The late 1970s were a fantastic time for graphic design and illustration on the cover of Apartment News, and this May issue stands tall among them. This cover perfectly encapsulates spring, that magical time of year when a young man’s fancy turns towards the upcoming golf and tennis tournaments.

While there were no details of the tournament itself included in this issue, it was a great season for events overall - and the Association’s energy was high in celebrating the success of the previous month’s trade show and seminar. 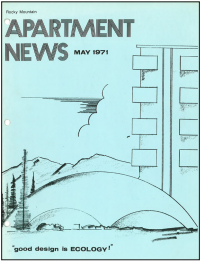 The May 1971 cover featured a message of “good design is ecology” and unique illustration with two different styles of buildings blended with natural backgrounds of trees, mountains, and landscape. The concept of ecologically designing a development to minimize the environmental destructive impacts by integrating into the living environment… was and continues to be a noble and well accepted idea. Though the association at the time fell short as there was no mention of the topic inside the issue! 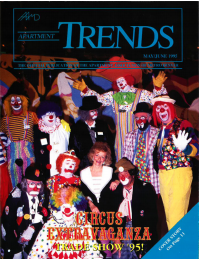 1995 Trade Show chair, Barbara Mitchell is surrounded by circus clowns as
she promotes the annual Education Conference and Trade Show, with a
“circus extravaganza” theme. The event featured two days of speakers &
networking, anchored with a keynote address from Dr. Bob Ross, advisor to US
Speaker of the House, Newt Gingrich. After the conference there was a circus
themed cocktail party, but we're not sure which clowns were invited to attend... 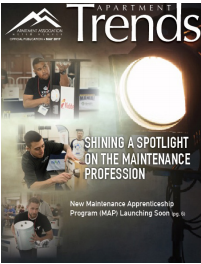 This cover illustrated a critical point for AAMD to have even more emphasis on the development of the maintenance profession. Shining this spotlight on maintenance included launching the new Maintenance Apprenticeship Program (MAP), which nearly 200 people have completed to date with over 70% of hired into a full time position. MAP led to other initiatives including the Hands On Maintenance Education program, where techs learn hands on skills through a variety of classes.